The next stop was Amritsar, in the Punjab state. I feel a lot better being in Punjab, since the majority of people here are Sikh, which is what I’m most familiar with (it’s my mother’s/family’s religion and culture). The city itself is nice; not as crowded as Delhi, not as dirty as Agra. There were actually some pretty nice homes here, too.

In the morning we went to the Golden Temple, which is considered the holiest Gurudwara in the world. The actual temple part is a lot smaller than I thought it would be, but the complex as a whole is huge, and has a giant pool of holy water where people go to bathe their feet or their entire bodies.

We got our offering of prasad and waited in line in a long corridor leading up to the temple. The temple sits in the middle of the holy water lake, and the water reflections played on the ceiling of the corridor and on the sides of the temple. On the inside, the temple is just as golden as the outside; even the fans were golden. They even have a TV camera for broadcasting the morning prayers, and that was golden too.

After we went inside we walked around and saw how they make chapattis (by hand and by machine) and huge vats of dal to feed the people who come to the temple. All of this is free, by the way. They said they feed up to 45,000 people free per day. The system is so efficient, too. Everyone does their part to serve tea, food, clean the dishes, etc.

We passed a tree where some women were standing with their scarves outstretched. A parrot up in the branches was throwing down fruit. So my mother stood there as well and waited for the parrot to throw a husk of one of the berries down. I suppose this was another form of offering.

Afterwards we saw a memorial garden where hundreds of Indian people were shot to death by the British. They were having a peaceful protest in 1919, during the British occupation, and the General at that time told his men to open fire with no warnings to the protestors whatsoever. Even children were shot. You could see the bullet holes still in the brick walls, and the huge well where a lot of people jumped inside to escape bullet fire. An Indian man went to London several years later to take revenge, but ended up shooting the wrong guy who had the same last name as the General.

That evening we drove to the Indian/Pakistani border, where they have a gate between the two countries and a ceremonial changing of the guard. This is the only safe entry point between the two countries. The two sides were so different; the Indian side had a bunch of people cheering and dancing and partying and having a good time, and the Pakistani side had…nothing. Over there, the women and men had to sit separately, and there was no dancing or anything. It was hilarious.

Oh, and each side tries to drown out the other’s music by blasting it at full volume. I think we won because of the Punjabi drums/bass. Like I said: hilarious.

Then we went to Chandigarh, which is much spacier/cleaner than the other places we’ve been so far, and I got some Indian suits. I’ve outgrown all my old ones, so it’ll be nice to have authentic suits again.

Next we drive to Patiala, where my mother grew up.

Before we drove to Agra, we spent some time in Delhi with our relatives to look at some of the historical places, like the Lotus Temple and Gandhi’s memorial site where he was shot and cremated. We also visited the largest mosque in India (the women were required to wear mumu-like wraps to cover their bodies) and took a rickshaw ride through the alleyway bazaars. Holy crap, those things are scary but interesting.

And we saw a show that was kind of like an Indian musical, with Bollywood dancing and everything.

I forgot to mention that every car has some sort of idol on the dashboard: Shiva, Ganesh, etc. The car that took us to Agra had these, as well as peacock feathers. Trucks are all painted and decked out with ornamentation. On the road I also spotted these weird car things with huge horns attached to them; they looked like something out of Doctor Suess.

Agra wasn’t how I imagined it. I’m sure it was a little different back in the day, but now it’s downscaled and downtrodden. You can see where they had the old cantonment during the British Raj, but now it’s all scraped out. It’s still called the cantonment area, though.

That afternoon we finally saw the Taj Mahal. Walking through the western gate, it doesn’t look real. At all. You see so many pictures of it, but when you stand before it in real life, it just doesn’t look or feel like it’s actually there. 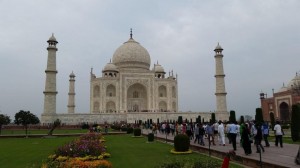 It’s breathtaking seeing it in person, and it’s huge. For those who don’t know, it was built in the 1600s by Emperor Shah Jahan as a tomb for his third and last wife. Supposedly her last wishes were for him to treat his children as a father instead of as a king, to build a monument in her honor, and to not take up another wife.

As we were walking around, looking out at the Yamuna River that bends behind the Taj, a family approached me and asked if I could take a picture. I thought they meant for me to take it of them (which has happened a few times now on this trip), but no, they wanted to take a family portrait with me.

This was probably a local family or from a place without many tourists. They saw a tall American and thought I looked exotic, or something. I wanted to be like, um, I am half Indian you know, but I took the picture with them anyway. My father got the same treatment when he visited with my mom a few years ago. As we were walking away, another family wanted a picture. Ugh.

The next day we looked at the Agra fort, where Shah Jahan was imprisoned by his son in the last years of his life. It offers a nice view of the Taj, which we mostly saw through fog, and rolling arches and columns everywhere. 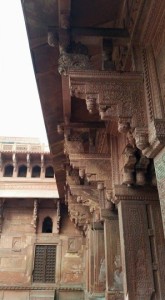 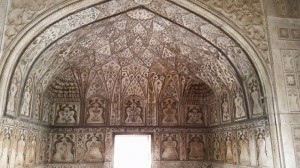 Oh, and we stopped by a McDonald’s here. Naturally, there are no cheeseburgers, but there are lots of chicken sandwiches (my favorite: the Chicken Maharaja Mac), a McPaneer Royale, and aloo (potato) sandwiches. SO WEIRD. And the spicy chicken was really, really spicy. They don’t play around.

We drove back to Delhi the next day, where we took a plane to Amritsar. We’re about to go see the Golden Temple and hopefully do a little shopping.